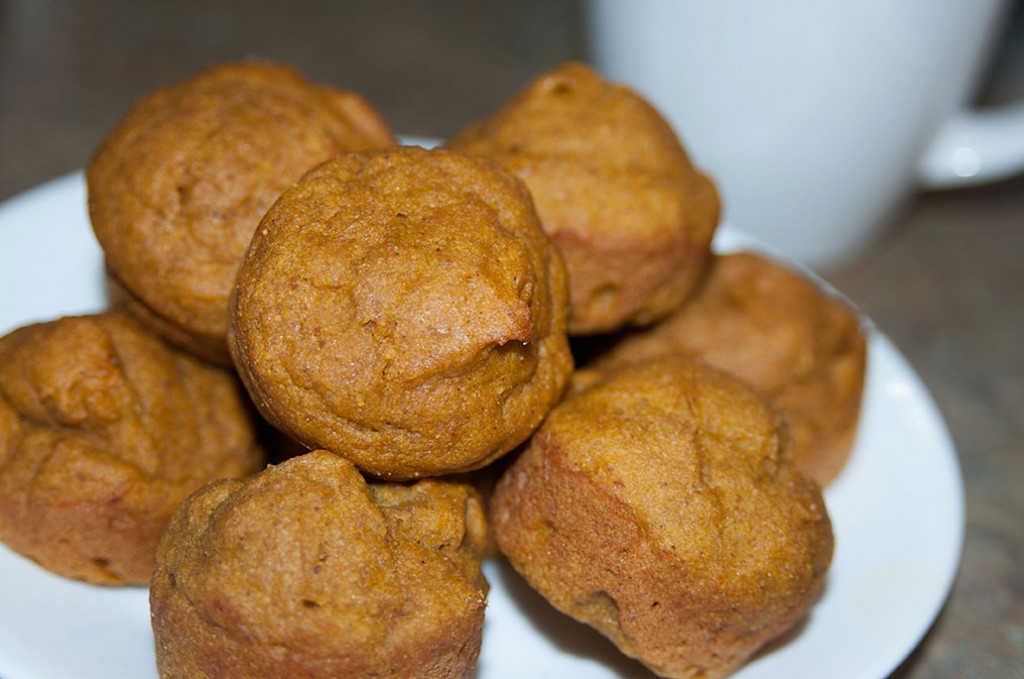 I found this recipe on pinterest at the beginning of the school year and put it to the side to try this fall. Well I have also begun my journey into eating cleaner/healthier. This recipe is far from being too sinful but it could be cleaner and if I want to be able to eat it it would have to be modified due to food sensitivities. So I gave it a try.

I have heard from many that it is hard to find a good gluten-free flour recipe. I came across this recipe on the Fine Cooking website and decided to give it a try. When using gluten-free flour you need to use either xantham gum or guar gum so your baked goods don’t end up crumbly. I chose to use xantham gum but was not quite sure how much I should use. I did a bit of searching online and came across this page and went with what the amount they recommended for muffins (1/2 tsp xantham gum to 1 cup gluten-free flour). This was my first attempt at any gluten-free baking. I had been told the texture would be different. It did seem a bit different but not too bad. As I was cleaning up I noticed on my xantham gum bag a chart on the back recommending 3/4 tsp xantham gum to 1 cup gluten-free flour. I am not sure if it differs from brand to brand or not so check the back of your packaging. I used Bob’s Red Mill this time.

Since childhood I have had issues with dairy but always just tolerated it and avoided it as much as possible but still used cow’s milk in cooking. I only ever really noticed it when dairy is the main ingredient in the dish. For the recipe I substituted almond milk. I had unsweetened vanilla flavor. I didn’t notice it as the recipe calls for vanilla anyway. As I am writing this and referring to my box of almond milk I have noticed that the brand I used contains carrageenan which I didn’t notice. From what I can tell you don’t want to use carrageenan even though it is natural because it can be causing inflammation, gut irritation and even cancer. I did find this website (scroll down to Almond Milk) that provides a list of which Almond milks contain it and which don’t. Note to self…next time read the label and put it on my list when I visit Trader Joes next.

There are limited sugars out there that are not refined in some form or fashion. Some of which leave a horrible aftertaste as well. Let’s face it sugar just isn’t good for us (even the good ones) but I am not ready to kick it completely out the door and there are some better choices out there if you are going to consume it. Plain white sugar has gone through a refining process that removes any nutrients that might be in it and quite frankly I just don’t want to put anything in my body that has had chemicals applied to it to make it white. Brown sugar if I recall correctly they actually add color back in to make it brown through various processes. In our house sugar was only ever used in baking and my husband’s many cups of daily tea. I rarely used it/added it to anything so obviously it was hidden in the foods/drinks we consumed. I tried getting my husband to use Sugar In The Raw but he preferred white sugar. Then one day my husband tells me he thinks he should find a healthier sugar. So I posed his question to a health coach friend on Facebook. “What sugar is best to use if using sugar?” Sugar In The Raw, Stevia, Agave Nector and others were mentioned. Turns out all go through some form of refining process. What she recommended was Rapadura, Maple Syrup & local raw honey. She said she uses stevia some but very limited. So I went out and researched it a little and after reading through things it just felt right to me. So when sugar is required I plan to follow her recommendation.

I also don’t use iodized table salt. I choose to use Celtic Sea Salt as it is unrefined and contains over 80 minerals in it. Instead of going into a long explanation about this at this time I recommend you check it out for yourself. I read Salt: Your Way to Health by Dr. Brownstein.

Did you know baking powder will sometimes have aluminum in it. I did find a recipe online to make your own. So I did and it was super super easy.

Please note that I replaced my oil with classic olive oil. The recipe called for vegetable oil. When consuming oils it is best to use monounsaturated vs. polyunsaturated. Vegetable oil is polyunsaturated. When I learned this in health class years ago I switched to using Canola in it’s place as it was touted as being a healthy oil. Through my journey to healthier living in my research I have actually found that Canola oil is an oil that was derived from the rape plant. Rapeseed oil was used as a lubricant on ships and steam engines. Rapeseed oil contains a large quantity of erucic acid which can reek havoc on the body. When the Industrial Revolution began to wind down and there was an over abundance of rapeseed, industry began to look at ways to make it consumable to humans as it was cheap to produce. In the 70’s the Canadians did just that. They developed a new type of oilseed that was derived from the rapeseed to produce less erucic acid. Canola stands for Canadian oil, low acid. That does not sound healthy nor appealing so I moved on to using olive oil. It is not the only oil out there it is just my preference as I have a sensitivity to some and don’t tolerate the flavor of some of the other “healthy oils”. 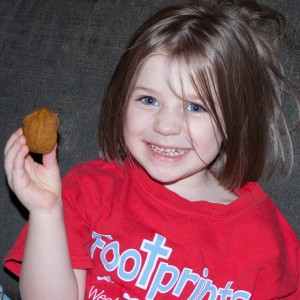 So I am sure you are probably ready to see the recipe right? Like I said this was my first time making it and I learned a few things along the way. The original recipe calls for spreading melted butter on the poppers after they have cooled and roll them in cinnamon and sugar. To keep the healthy I chose not to do this. If I were to do it I would use organic ghee and then use rapadura and cinnamon. To be honest it really doesn’t need it. I gobbled up about 4, my husband while I was out did the same not knowing they were “cleaned up” and 3 of my 4 kids approved as well.

The Day After: the girls enjoyed the muffins at breakfast and my middle son requested them for his school snack. I think they are a hit. The recipe seems rather adaptable so I see us playing with it some more. I see chocolate chips, bananas, apples and more in our future.